Mahabharata: The Greatest Spiritual Epic of All Time. by Krishna Dharma, 2008 (source)

Arjuna is headed to heaven! But he's just visiting because he needs to borrow some weapons.

First there is a journey! But Arjuna has mountains to climb and people to see so he travels quickly.

The mountain top is for fasting and meditating and balancing on one leg to get the attention of the gods.

Eventually the gods start to show up! Arjuna gets one weapon from Indra, who promises him more if he meets and makes nice with Shiva.

Shiva shows up as a hunter - They both shoot at the same animal and then they fight! They fight with so many arrows it's amazing there are any trees left anywhere. (Even though the quivers Arjuna had were never ending... where did the arrows/wood/etc come from????)

Shiva eventually wins when Arjuna figures him out and stops fighting. So he gets another weapon from Shiva and then more from Indra. He ends up with so many weapons. Visiting heaven: Success! 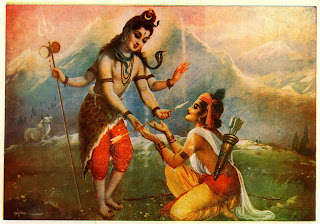 Mahabharata: The Greatest Spiritual Epic of All Time. by Krishna Dharma, 2008 (source)

Wife 2 - I need to  continue my line so we may not have to keep up with our kid.

Wife 3 - Maybe going to marry someone else - KIDNAP HER!!

Who knows, now it's time to burn down the forest! 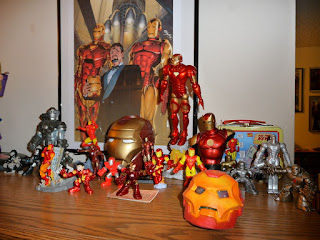 "My Iron Man Collection" by heath_bar is licensed under CC BY-NC-ND 2.0

Week 13 Story: Into the Fire

Sita had been waiting on Rama for what felt like years. It had been hard, but she never lost hope that he would come to her rescue. Even when he was fighting Ravana and all his demons, she did not falter. She knew Rama would be victorious, and they would be reunited.

Despite her hope, no matter her unwavering belief in him, Rama did not seem happy to see her. He was utterly dismissive and didn't even come to great her himself. He sent a servant to fetch her as if she was the day's shopping.

For the first time since she was captured, Sita knew absolute despair. This man looked like her Rama, he sounded like her beloved husband, but something had happened to him. It was as if Rama no longer loved her.

Sita felt hopeless. If Rama no longer loved her and was not the same Rama she knew, this may not be the world for her anymore. Sita decided to go into the fire. It would at least demonstrate to the world her love and faith in Rama and would be an honorable death for her.

As she watched her funeral pyre take shape, she thought back on her years with Rama. She remembered his smile, and she would love to hear his laughter again before she went into the flames. Unfortunately, it seemed Rama had well and truly fallen out of love with her.

The pyre was ready, and the kindling had been gathered. It was time. Sita took a last look around at those gathered. Lakshmana, her brother by marriage who still believed in her. And Rama, beloved Rama, now so distant. All those who had fought by Rama's side to save her would now be guests at her funeral.

Sita took a breath and walked forward into the fire. 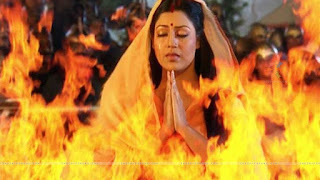 Author's Note: This story came primarily from The Indian Story Book: Rama's Quest by Richard Wilson, 1914 (source) Illustrated by: Frank Pape, although there have been several other versions of the Ramayana this semester. This most recent retelling was a fast paced read with not a lot of focus on the reincarnation and god attributes of everyone involved. I decided to expand a bit on Sita's trial by fire and be somewhat vague about if she expects to come out alive. For the most part my Sita assumes that if you walk into a fire, that's it.

It ends up feeling a bit short because of the way the story is written, but it does really well at showing how Sita is just like yes, this is done, I get to see my husband! And she shows up and Rama is basically like "Why don't you look worse, clearly you don't love me." Which is totally logical and makes complete sense!

Also completely logically, Sita is like well, everything is now 100% awful so let's go jump in a fire! 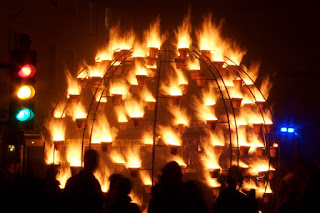 "Ball of Fire" by SimonWhitaker is licensed under CC BY-NC 2.0


Quick retelling of the Ramayana - much less focus on gods and 'supernatural' type events and more focus on adventure and human feats of greatness!

The adventures are just as exciting and do seem more real without the added details of godlike powers or abilities. We have monsters and heroes instead of gods and demons! A really powerful archer against multitudes 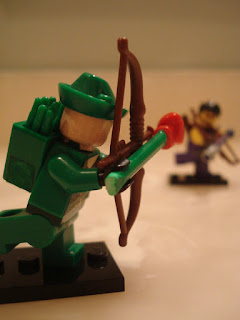 "Green Arrow" by 1upLego is licensed under CC BY-NC-SA 2.0

Just a few weeks left! I seem to be sitting in an okay place points wise. I just need to keep focus over these last two or three weeks and everythings should work out!

I've done a lot of research for this class and an independent study course I am working on. I feel like I could actually live on wikipedia now, so I need to remember to do a wikipedia trail each of the next few weeks. I'm already there, might as well blog about it and get a couple of points! :)

A picture I found that I enjoyed in the annoucments was this vitruvian cat. 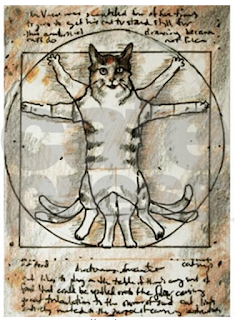 Source - Announcments blog, Vitruvian Cat, noted to be a kitchen magnet at CafePress

I also enjoyed the video of poet Chitra Banerjee Divakaruni:

So I started off with Peafowl because I was specifically looking for information on peacocks for a story featuring Saraswati. In the story she is actually using wikipedia so I needed to see what sort of trail I could come up with!

An easy fun read from peafowl is iridescence. Peacocks have such shimmery feathers, so it's great to click over to this article, read a bit about iridescence in general and then see what else is considered iridescence. The weird one was the description of the sheen on raw meat. Accurate, but ew.

Rather than read about meat, I clicked into compact discs. Yes, apparently they still make them! Seems to be largely about computer/business use now and less about media. Also first fun fact would be asking someone hey, what to peacocks and CDs have in common? They're both sparkly!

Finally I found my way to the wikipedia page for Beethoven's 9th symphony. There was a fun tidbit on the CD Page that supposedly the size of CDs were picked because the tech at the time allowed for the entirety of Beethoven's 9th to be placed on one disc. Apparently an original, handwritten manuscript of this symphony was the first musical score added to the Memory of the World Programme Heritage List by the UN. 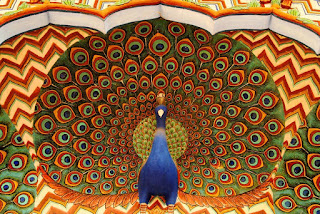 Photo of a peacock statue in Jaipur -  "Peacock" by guy_incognito is licensed under CC BY-NC-SA 2.0

Mahabharata: The Greatest Spiritual Epic of All Time. b y Krishna Dharma, 2008 ( source ) Arjuna is headed to heaven! But he's just v...